Yoga is a form of therapy that is increasingly backed by science. Respected researchers at medical institutions including Duke and Harvard have studied the potential health benefits of yoga. The most promising results come from a practice combines asana (or the physical poses and sequences) with pranayama (breath work) and meditation.

The benefits being studied are not just for seasoned yogis. Many studies included those who were new to practice and suffering from existing conditions.

Some of the health benefits that have gained some backing are:

Improved flexibility is one of the most obvious benefits of yoga, but it is one that can lead to multiple benefits, including a reduction in aches and pains. Tight hips can affect the alignment of the thigh and shin bones, causing knee pain knees. Tight hamstrings flatten the lower spine, which can cause back pain.

Many yoga asanas build muscle strength as well. You can grow stronger and maintain muscle mass using just the weight of your body.

While Flow or Ashtanga classes can get your heart rate up, even gentler yoga exercises improve cardiovascular fitness. Studies have found that yoga lowers the resting heart rate, increases endurance, and can improve your maximum uptake of oxygen during exercise.

Yoga shows promise as a treatment for relieving some kinds of chronic pain. This can have positive spin offs for mood and need for medication. In one study of people with chronic neck pain, yoga reduced pain scores by more than half. A combination of asana and meditation has been shown to reduce pain in people with arthritis, fibromyalgia and carpal tunnel syndrome. Yoga can even help some back pain. In one study, researchers worked with more than 200 people with persistent lower-back pain. Those who took yoga classes reported less pain and better functioning… and benefits lasted for several months!

In a small study in 2007, UCLA researchers examined how Iyengar yoga affected people who were clinically depressed and for whom antidepressants provided only partial relief. After eight weeks of practicing three times a week, the patients reported significant decreases in both anxiety and depression.

Another study found a significant increase in serotonin levels and a decrease in both the levels of an enzyme that breaks down neurotransmitters and cortisol.

Long-term meditation practitioners demonstrate changes in brain structure. Scientists have shown that meditation increases activity in the area of the brain associated with positive moods and emotional resilience. This relates to being less reactive under stress and feeling happier.

Exercise is linked with increased levels of a brain chemical called gamma-aminobutyric acid (GABA), which is associated with positive mood and a sense of well-being. According to a Boston University study, yoga can increase GABA levels more than walking.

Classes that include the spiritual elements of practice, not just asana, guide you to explore concepts of gratitude, empathy, and forgiveness, as well as a sense that you’re part of something bigger. Many of these concepts have been linked to our happiness and sense of well-being.

Various aspects of yoga train your attention or mindfulness, which helps your brain work better. One study found that following a hatha yoga session study participants completed a set of mental challenges both faster and more accurately than they did after a brisk walk or a jog.

Meditation may help ward off age-related cognitive decline. The parts of the brain associated with cognitive processing thin with age, but have been found to be thicker in long-term meditators.

A Duke University analysis of studies on yoga for psychiatric conditions found evidence that yoga can be helpful for treating sleep disorders. A combination of asana, pranayama and meditation relaxes your muscles, slows your heart rate and helps you control worry to make you ready for sleep. Compared with postmenopausal women who did passive stretching, yoga practitioners showed a big drop in incidence of insomnia.

A chronic state of inflammation can raise your risk for disease. Researchers at Ohio State University found that regular yoga practitioners had much lower blood levels of an inflammation-promoting immune cell called IL-6 than a group new to yoga. When both groups were exposed to stress, the regular yogis showed smaller spikes of IL-6.

Yoga has been linked to lower cortisol levels. Chronically high cortisol levels are linked with depression, osteoporosis, high blood pressure, insulin resistance, compromised immune response and memory issues. It may lead to weight gain and visceral fat, which contributes to the risk of diabetes and heart attack.

Cells include structures called telomeres, which get shorter over time. When telomeres get too short and cells can no longer divide, they die. An enzyme called telomerase helps preserve their length. A program which included an hour a day of yoga showed a 30 percent increase in the activity of telomerase.

One of the first studies to look at how yoga affects genes indicates that practice can alter the expression of immune-related genes in blood cells. This suggests yoga may have the potential to influence how strongly the genes you’re born with affect your health.

Meditation has the most science backing a beneficial effect on the functioning of the immune system, appearing to both boost response when needed to fight infection and lowering it in cases of some autoimmune disease, such as psoriasis.

When researchers compared the vertebral disks of yoga teachers to healthy, similar-aged volunteers, the teachers’ disks showed less evidence of age-related degradation. Bending and flexing may help push more nutrients from the blood vessels through the outer layer of the disks, keeping them healthier over time.

By practicing good posture and alignment in yoga, you also protect your spine from the cumulative effects of bad posture.

High blood pressure, high cholesterol, high blood sugar, and a sedentary lifestyle are all risk factors for heart disease. All can potentially be reduced by yoga. A review of 70 studies concluded that yoga shows promise as a safe, effective way to boost heart health.

Yoga and meditation, by slowing the heart rate and inducing the relaxation response, may help bring blood pressure down to safer levels. In randomized, controlled trials yoga reduced blood pressure as well as or better than nutrition and weight-loss education. (If you have high blood pressure, consult with your doctor before you practice.)

Two studies of people with hypertension, compared the effects of Savasana with simply lying on a couch. After three months, Savasana was associated with a drop in both systolic (the top number) and diastolic blood pressure (the bottom number).

Adults at risk for type 2 diabetes who did yoga twice a week for three months showed a reduction in risk factors including weight and blood pressure.

It’s well documented that weight-bearing exercise helps ward off osteoporosis. While many forms of exercise include bearing weight on your lower body, yoga includes weight bearing on  the arms, which are particularly vulnerable to fractures.

Yoga has been shown to improve maximum volume of breath and efficiency of exhalation, reducing overall rate of breathing. A 1998 study introduced a yogic breathing technique to people with lung problems due to congestive heart failure. After one month, their average respiratory rate decreased from 13.4 breaths per minute to 7.6. Meanwhile, their exercise capacity increased significantly, as did the oxygen saturation of their blood.

Yoga also promotes breathing through the nose, which warms it, humidifies it, and filters out pollen and dirt. The combination may reduce asthma triggers.

Studies of people with asthma, high blood pressure and Type II diabetes have shown that yoga helped them reduce or eliminate their need for medications. This not only saves money, but reduces side effects and the risk of dangerous drug interactions.

For a list of yoga classes available at the Wellness Institute, please visit our Weekly Classes Schedule 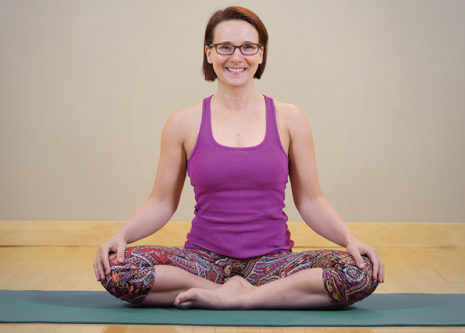