Fitness Trackers: The Pros and Cons

In 2020, technological advances seem to happen almost every day. We are able to do things more efficiently and accurately with better precision because of new software developments every year. One technology has entered the fitness industry that has been overwhelmingly apparent is fitness trackers.

Whether it’s a Fit Bit, an Apple watch, a Garmin or whatever brand catches your eye, trackers are becoming more common for people to wear, and brands release newer versions of their products every year. Consumers are able to track steps, heart rate, workouts and even challenge friends or family to see who gets more activity in the week. It seems that the possibilities are becoming almost endless!

Are you on the fence regarding getting a tracker? Have you used one in the past and for whatever reason decided not to continue? Or do you swear by it to track your daily movement? Wherever you may be in this continuum there are some things to consider regarding these pieces of technological equipment.

One major positive aspect about fitness trackers is that they help with motivation. You receive or purchase this new gadget and of course it is going to be exciting to use. If perhaps exercise isn’t something you are keen on doing, it has now been made a little more exciting. This is awesome! Trackers can definitely help with jump starting that initial desire to become more active and health conscious.

Accountability now becomes a part of the equation. Not only are you being accountable to yourself, but a lot of devices allow people of the same brands to be accountable to each other. For example, with Fit Bits you can create different challenges by syncing with others to see who can get the most steps in a week. With an Apple watch, you can see who completes their workouts in real time.

Fitness trackers also allow us to do more than just track steps or calories. They allow us to use the device as a watch, answer text messages or even respond to calls. Of course not everyone needs these specifications, but the desired features and budget you have will impact which tracker you decide to get. The fancier specs, the higher the cost.

While there are benefits to having a tracker, there are some things to keep in mind. If your main goal is to specifically track exercise and steps it is important to know the difference between the two.

Per Canadian guidelines for exercise, moderate to vigorous activity of at least 150 minutes per week or at least 75 minutes of vigorous activity per week are the standard recommendations for health. The biggest thing to note is that exercise is defined by the intensity of which we work. Getting a lot of steps in a day does not necessarily imply that exercise was done at a moderate to high intensity. Some examples of lower intensity or unstructured exercise would be walking from your desk to the lunch room, walking from your car to the store or walking around your home completing chores. Although you may get 10 000 steps a day, it doesn’t necessarily equate to your total exercise time in the recommended intensity range.

The idea behind tracking steps is to reduce the amount of sedentary behavior and have people think about increasing their overall daily activity which is separate from exercise. A person can be generally active by participating in leisure sports like curling or golf however the remaining hours of the day are dominated with sitting. Adopting a healthier lifestyle not only involves exercise hours, but also to limit the amount we sit in addition to that – and that’s what these trackers allow people to be conscious of.  If people are able to regularly hit a certain step count by limiting their sitting then the goal is over time is that they are able to adopt certain habits that make them less sedentary and more active. If we are able to regularly adopt those habits then over time, being active becomes second nature.

Now looking back at those guidelines, exercise depends on intensity. A fitness tracker allows us to track an individual’s heart rate. During an exercise session an individual should be able to see their heart rate slowly increase at the start while they warm up, remain elevated for a certain amount of time during their actual exercise portion and be able to gradually see it lower during a cool down phase.  Generally speaking over time as an individual increases their fitness level, it may take a higher intensity exercise session to reach that same heart rate. For example, if an individual goes for a 30 minute walk and their heart rates average 145 bpm throughout that session, over time as the individual starts to become more active in perhaps a month or two their heart rate may average 120 bpm. This means that their cardiovascular system is more efficient and doesn’t need to work as hard for that same workload. When it comes to exercise, they are now able to increase their intensity to reach that heart rate, like increasing pace to a jog or a run.

For those allergic to technology, fear not: an individual knows if they are progressing whether have a tracker or not by simply asking themselves – “is this easier than it once was when I first started?”

As stated earlier, many fitness devices track planned and structured exercise. During workouts, you’re able to see things like heart rate, overall caloric expenditure and overall duration of the workout. That’s a lot of measuring that one device can do, but now the big question is: how accurate are they?

A study done by Stanford looked at seven different fitness trackers. They concluded they were fairly accurate at measuring was heart rate with less than a 5% margin of error (due to being able to get a direct measurement via the LED light measuring blood flow in the capillary veins). However they found that the largest margin of error was measuring energy expenditure; or in other words, how many calories are burned.

Another study done by Bender et. al (2017) measured fitness trackers and the accuracy of the  measures they track. This study found that measurements such as step count vary as much as 26% from tracker to tracker. Other measurements such as caloric expenditure are dependent on the tracker itself, the manufacturers company and the algorithm used for that specific measurement. Due to major differences between brands, this study concluded that trackers should not be heavily relied to determine health behaviors.

What does this mean?

If you measure how many calories you burn a day and use that number to determine other health behaviors like your nutritional choices that perhaps might not be the best choice. “I burned 500 calories, I can afford eating that chocolate” is perhaps a familiar type of statement you might hear from someone that heavily uses trackers to determine their nutritional choices. Using those numbers from the device may not be a good idea based on the fact that the numbers your tracker is giving you are probably not 100% accurate. It doesn’t mean that you shouldn’t track your caloric expenditure, but these discrepancies are something to be aware of and shouldn’t drive other health decisions. Instead, flip the script and use the numbers and statistics that from the device to motivate us to keep going. For example, measuring consistency (as an example, exercising three times two weeks in a row) can prompt further motivation.

Fitness trackers are without a doubt a trend that can be useful in the fitness industry. They are user friendly, promote motivation in your activity, can do a lot more than just track steps like double up as a watch and let’s be honest, a very good gift idea! However, it is important to realize that the numbers you see may not be 100% accurate when it comes to energy expenditure. Just note that at the end of the day, no technology is perfect but feel free to try them, find one you enjoy and have fun with them. 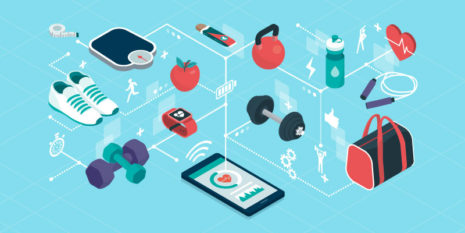